A man with locked-in syndrome who says his life  is a “dull, miserable, demeaning, undignified and intolerable” life and is fighting in the courts for his right to die. Tony Nicklinson, 57, after suffering a dreadful stroke 7 years ago ago was left paralysed below the neck. He is now only able to communicate  by blinking or with limited head movement. 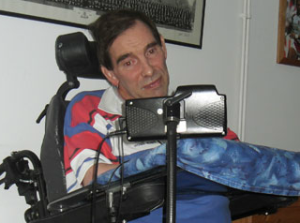 He is pursuing the legal right for doctor to intervene to end his “indignity” and have a “common law defence of necessity” against any murder charge.

In this article from the BBC he explains his position, delivered in his own words. This is a hugely complex subject and is certainly an emotive one, with people drawing lines in the sand which, according to Tony, some will not cross in order to even consider reasonable arguments for the right to euthanasia.

Tony Nicklinson was left paralysed and with locked-in syndrome by a stroke seven years ago. The 58-year-old wants a doctor to be able to lawfully end his life and a four-day hearing in the case is due to begin at the High Court later.

Here Mr Nicklinson, from Wiltshire, explains why he wants to change the current law on murder and euthanasia. These are his words: I have locked-in syndrome and it makes my life a living nightmare.

I cannot speak and I am also paralysed below the neck, which means I need someone to do everything for me. For example, 90% of itches have to be endured because by the time someone comes to scratch it and I have laboriously explained where it is, the itch has gone.

Now I just put up with them. Or there is the screaming frustration of wanting to make a point but knowing that the only way I can express my opinion, by the board or computer, are useless in normal conversation.

Another example is having your teeth cleaned by someone else. It is a horrible experience and I doubt you would want it done more than once a day. I could go on.

However, all these things are physical and arguably one can learn to live with them.

What I find impossible to live with is the knowledge that, unlike you, I have no way out – suicide – when this life gets too much to bear. I do not say these things to get your sympathy but to get justice.

From The BBC, click to read the full article there[/box]

To me the law seems incredibly cruel on the one hand, forcing  sufferers to endure pain and discomfort for such long periods of time until they can not be kept alive anymore bu any means.

Then on the other hand, life is sacred and really should be preserved …But is it right to do that at all costs?

It would be great to get your stories and views. Tell us here in the review section below or on Facebook: Disability Aids on Facebook

Join the debate and tell us what you really think .. Cancel reply